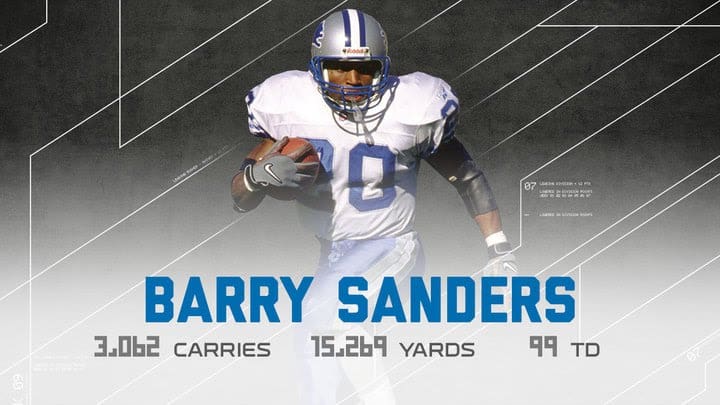 Featured
Barry Sanders Was the Greatest Lions Player & 1 of the Best RBs of All-Time
With 10 Pro Bowls, 6 All-Pros, 2 OPOY, and 1 MVP, Barry Sanders is easily the greatest Lions player of all-time and one of the best RBs ever
NFL/YouTube
By Owen Althouse, PSO Asst. Director of Sports Operations
Jul 16, 2021

After a Heisman-winning season with Oklahoma State, Barry Sanders put himself in a prime position to be drafted early in 1989. The Detroit Lions selected Sanders with the third pick of the draft. He had a spectacular rookie season, winning Rookie of the Year along with being selected to the Pro Bowl and All-Pro teams.

Sanders was a Pro Bowler for all ten years of his career, and he was an All-Pro for six of those seasons. He also broke numerous NFL and Detroit Lions records, including most consecutive GP with 100+ yards and most consecutive seasons of 1,500+ yards as he had a prime that was up there with any Running Back ever before eventually retiring at 30 years old after a decade of unprecedented dominance.

Not only did Barry Sanders shatter the Lions records books but he also broke numerous NFL records. Sanders won OPOY in 1994 and 1997, along with winning MVP in ’97. He was inducted into the Pro Football Hall of Fame in 2004 during his first appearance on the ballot. He is regarded as one of the best running backs in the game alongside Jim Brown and Emmitt Smith. Although Sanders didn’t play for as long as Smith, he had a lot more YPG (99.8), the most all-time besides Brown who had fewer career YDS.

Despite having the best RB in the league, the Lions were never able to go on a deep playoff run as they typically lost in the Wild Card Round and many times didn’t make the playoffs even with Barry Sanders. After 1998, Sanders announced his retirement after playing for just ten years but left his mark on the league that still lasts to this day with plenty of highlights featuring all-time jukes and an abundance of records that won’t be broken for years or even decades to come.