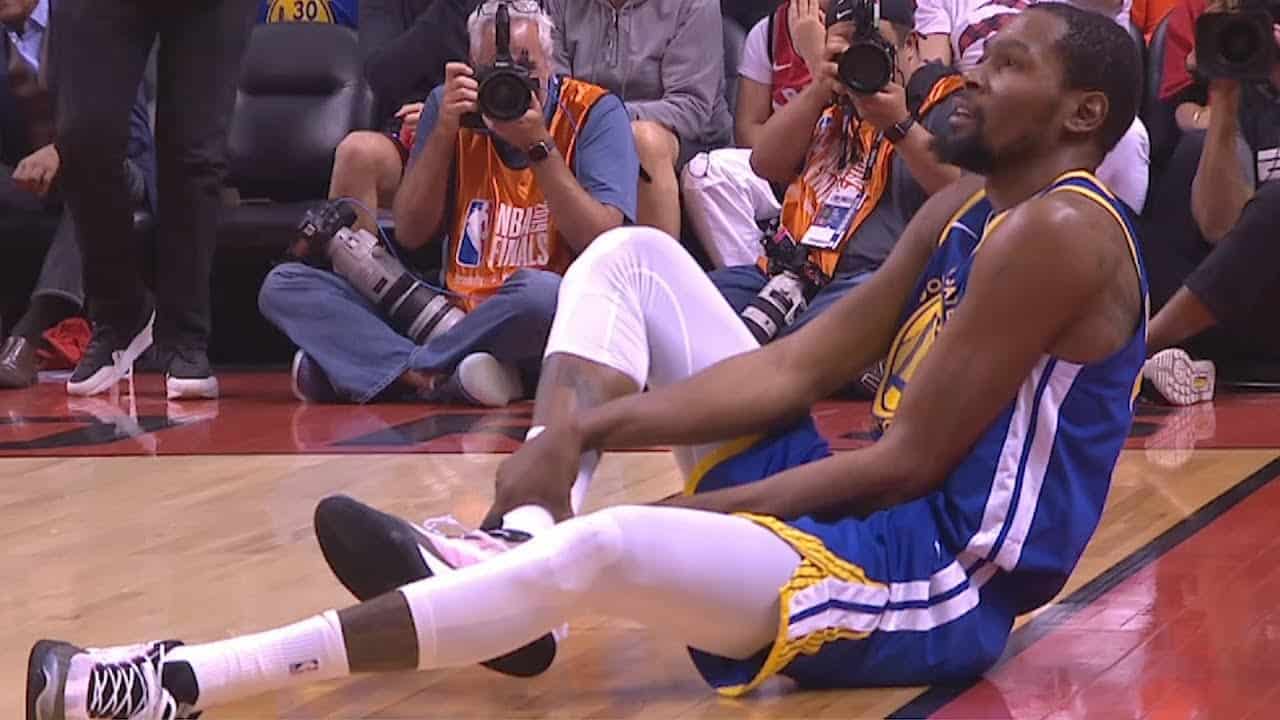 Featured
OTD in 2019: Kevin Durant Suffered a Torn Achilles After Returning in NBA Finals Game 5
June 10, 2019: After returning from a calf strain, Kevin Durant ruptured his Achilles in Game 5 of the NBA Finals against the Toronto Raptors
Chris Smoove/YouTube
By Sam Grigsby, PSO Asst. Director of Sports History
Jun 10, 2021

Kevin Durant has rightfully been considered among the best players of his era, and one of the greatest scorers ever. MVP, champion, scoring leader, All-Star, his accolades are hard to match. Injuries derailed his career at several inopportune moments making room for countless what-if scenarios. His most severe and unfortunately timed injury came in the 2019 NBA Finals.

He was first ruled out indefinitely in the second round with a calf injury against the Houston Rockets. Despite that, the loaded Golden State Warriors team led by All-Star Klay Thompson and former unanimous MVP Stephen Curry stepped up and willed their squad to the Finals with a sweep of the Blazers in the WCF, and got to a point Durant could return about a month later.

The Warriors were down in the Finals 3-1 to Kawhi Leonard’s Toronto Raptors. The situation was not entirely unknown to longtime members of the squad who could recall being in a similar situation in 2016 against Durant and Russell Westbrooks’ Thunder, but circumstances were not entirely the same. The Warriors had been to five straight NBA Finals. Extended postseason runs tend to wear players out, and their roster, bench-wise, was much weaker than before.

On the brink of elimination, Kevin Durant was cleared to return from his calf injury for the critical win-or-go-home game in Toronto. Durant looked good in the first quarter scoring 11 points, but tragedy struck in the second when he dribbled at former teammate Serge Ibaka before letting the ball fall away as he hopped off the court on one leg. Without any contact, he had ruptured his Achilles tendon, a devastating injury. Durant would obviously be ruled out for the series and would end up missing about 18 months of action.

Golden State stayed alive to force a Game 6, but all hope was lost when Klay Thompson tore his ACL in the 4th Qtr of Game 6 and Steph Curry missed the potential GW-3PM. Toronto went on to close out the series, winning their first championship in franchise history that many believe was only possible because of Durant’s (and Thompson’s injuries). KD departed from Golden State in the offseason as a free agent to team up with Kyrie Irving in Brooklyn where he became the first player to play at an MVP level after suffering the worst injury in sports.

June 10, 2019: Kevin Durant returned from a heel injury in NBA Finals Game 5 with #Warriors trailing 3-1 in the series but ended up tearing his Achilles in the 2nd Qtr against Toronto and then returned 18 months later with the #Nets for 2020-21 Opening Day pic.twitter.com/qUaEuwi9Kp