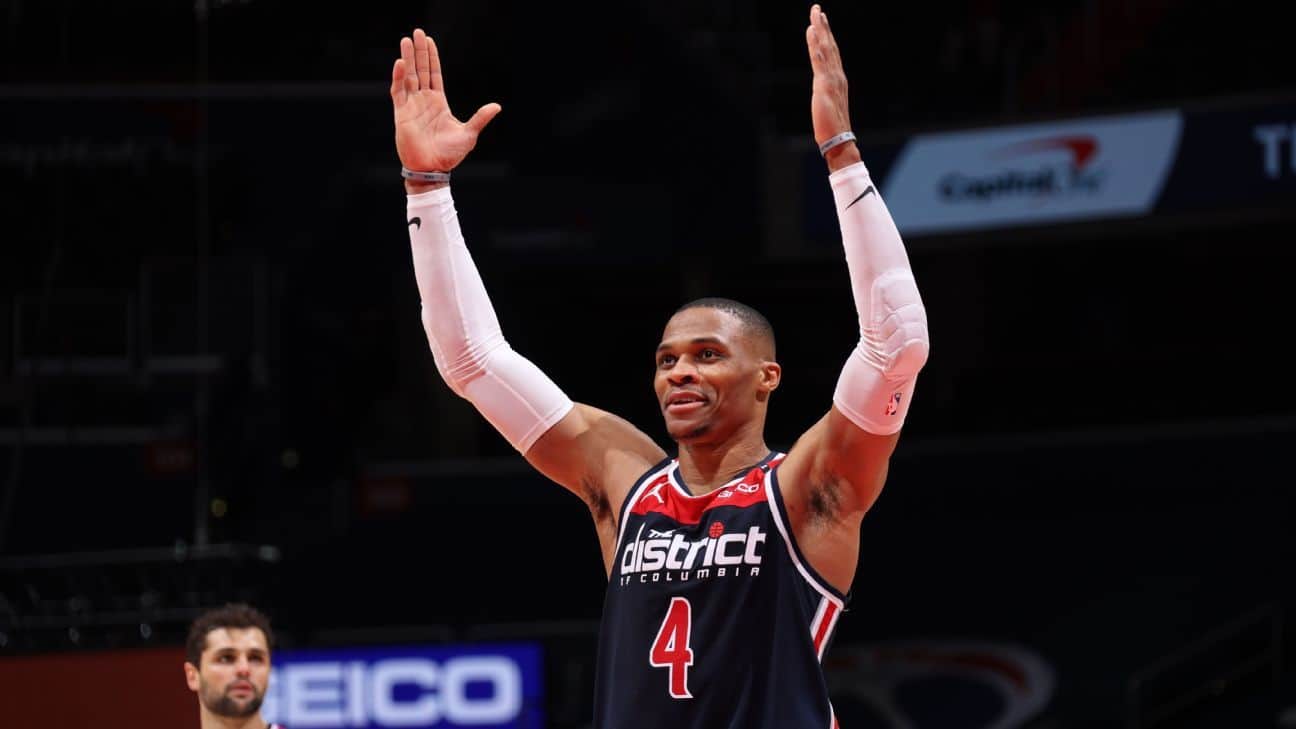 Featured
What Happened in Sports: May 3, 2021
What happened in sports on May 3, 2021 ft. Westbrook making more history, the Marvel Avengers AR broadcast, Carmelo top-10 scorer, and more!
ESPN
By Pro Sports Outlook, The Front Office for Fans
May 03, 2021

May 3rd, 2021 was highlighted by Russell Westbrook breaking more ridiculous records with his all-around production that has fueled DC’s late surge with the playoffs on the horizon. THT and AD sealed the Lakers big win over the red-hot Nuggets despite LeBron and Schroder’s absences as the reigning champs badly needed to get back on track. Carmelo Anthony became a top-10 scorer of all-time and the NBA broadcasted the Warriors-Pelicans in an Avengers special edition format that showed the future potential of AR during broadcasts of pro sports games and events.

See what happened in sports on May 3rd last year, headlined by episodes five and six of “The Last Dance” airing, the Bengals declining John Ross‘ fifth-year option, and the Falcons doing the same with Charles Harris. This daily sports article includes real headlines only (no clickbait rumors), all of the best highlights, interesting facts from around the NFL, NBA, & MLB, the main games to watch, top performances of the day, notable birthdays, and a quick recap of significant events on this day in sports history.

Sumner put ’em on a POSTER

Draymond throwing it DOWN 😤 pic.twitter.com/tZUVUMonZD

Another 40+ point outing for Steph!

AD with an unreal block to seal the Lakers’ win 😲 pic.twitter.com/h24rg6PKTA

25 PTS and the game-clinching block for @AntDavis23 in the @Lakers W vs. Denver! #LakeShow pic.twitter.com/Wup4et8mMA

Kim saves a run with a great play

What a play by Ha-Seong Kim! 😱 pic.twitter.com/X07zZAJ9R2

4-point play for Melo moves him into 10th in all-time scoring! 👏 pic.twitter.com/vsF1scCy42

May 3, 2007: The “We Believe” Golden State Warriors upset the 67-win Dallas Mavericks led by MVP Dirk Nowitzki with a Game 6 victory during the 1st Round as the 1st No.8 seed to ever beat a No.1 seed under the current NBA postseason 7-game format
pic.twitter.com/ZH8YKDhiXg

On this date in 2011, Derrick Rose was named the youngest #KiaMVP in league history!pic.twitter.com/MmQfOVWruF

.@DatDudeBP was so fun to watch in the field.

10 years ago, he made this behind the back play. 😱 pic.twitter.com/UnaztDkUmv

May 3, 2019: Denver Nuggets and Portland Trail Blazers played the 1st 4OT postseason game since the NBA-ABA merger as Rodney Hood hit the GW-3PM for a 138-136 Blazers victory
pic.twitter.com/l07queSBJO

2019: Denver Nuggets and Portland Trail Blazers played the 1st 4OT postseason game since the NBA-ABA merger as Rodney Hood hit the GW-3PM for a 138-136 Blazers victory

2018: QB Matt Ryan signed a 5y/$150 million contract extension with the Atlanta Falcons to become the 1st player in NFL history with an average annual salary of $30+ million

2009: Tampa Bay Rays OF Carl Crawford tied a modern MLB record with 6 SB in 1 game during a win over his future team, the Boston Red Sox 5-3

2007: The “We Believe” Golden State Warriors upset the 67-win Dallas Mavericks led by MVP Dirk Nowitzki with a Game 6 victory during the Western Conference 1st Round as the 1st No.8 seed to ever beat a No.1 seed in the NBA postseason under the current 7-game format

1981: Boston Celtics completed an epic comeback on the Philadelphia 76ers in Game 7 of the Eastern Conference Finals despite facing a double-digit second half deficit and overcame a 3-1 series lead as Philly failed to convert a single FGA during the final 5 mins as Larry Bird led Boston’s ECF win and 1981 NBA Title

1980: San Francisco Giants 1B Willie McCovey hit the 521st and final HR of his 21-year Hall of Fame career

1968: NBA announced that the St. Louis Hawks would be relocating to Atlanta, Georgia

1936: Hall of Fame OF Joe DiMaggio made his MLB debut with the New York Yankees, recording 3 hits in a victory over the St. Louis Browns