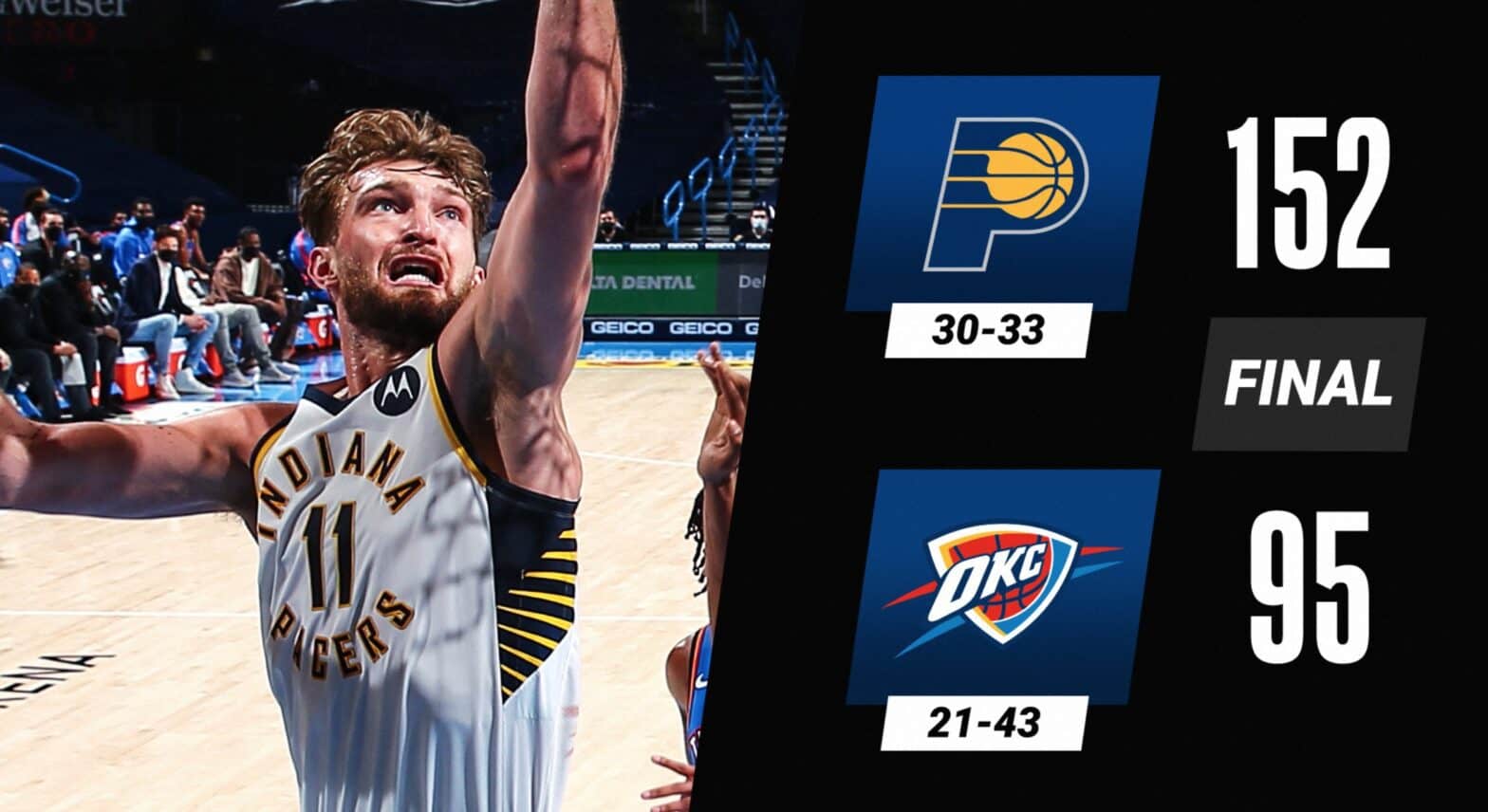 Featured
What Happened in Sports: May 1, 2021
What happened in sports on May 1, 2021 ft. Pacers record-breaking road victory, Luka's historic triple-double, Lamelo's underhand dime, & more
NBA/Twitter
By Pro Sports Outlook, The Front Office for Fans
May 01, 2021

May 1st, 2021 was remembered for the largest home loss in NBA history as the OKC Thunder fell to Indiana by 57 points that was fueled by a historic triple-double from Domantas Sabonis. Luka Doncic also made NBA history with his 20-assist triple-double with only one turnover to out-duel Russell Westbrook and the Wizards as Bradley Beal’s GW-FGA missed. LaMelo Ball made his return after missing a month with an unreal underhanded full-court dime, the NFL Draft concluded with rounds 4-7, and the Brewers walked off the reigning World Series champions.

Duncan Robinson became the fastest ever to record 500 career 3’s, doing so in only 152 games. Cole Anthony stepped up with an ice-cold game-winner at the buzzer to beat Memphis. Michael Conforto’s 9th inning blast lifted the Mets past the Phillies, Steph Curry’s 3rd quarter surge fueled the Warriors’ blowout in Houston, and George Springer introduced himself to Blue Jays fans with another multi-HR game out of the leadoff spot.

See what happened in sports on May 1st last year, headlined by the 2020 NBA Draft lottery and combine getting postponed, MLB umpires having to take pay cuts, and the Jaguars not exercising Fournette‘s fifth-year option. This daily sports article includes real headlines only (no clickbait rumors), all of the best highlights, interesting facts from around the NFL, NBA, & MLB, the main games to watch, top performances of the day, notable birthdays, and a quick recap of significant events on this day in sports history.

This LaMelo dime was UNREAL 🤯 pic.twitter.com/EPDLMGxdmM

LUKA TO DORIAN FINNEY-SMITH FOR THE WIN 😱 pic.twitter.com/JufDOqxTiy

Clarkson explodes to the rim

Clarkson dancing on his defender 🕺 pic.twitter.com/8xLK7rwFJU

Jokic has DEN on 5-game streak

T-Shaw walks off the champs

The Mayor of #walkoff city.

Luka and Russ DUELED in the @dallasmavs 125-124 win over Washington! 🔥

3⃣0⃣ for @StephenCurry30, including 23 in the 3rd quarter to lift the @warriors! pic.twitter.com/xpYlMBy9Vb

Most no-hitters ever OTD

May 1, 1991: At 44 years old, Texas Rangers SP Nolan Ryan pitched his MLB-record 7th career no-hitter against the Toronto Blue Jays as the oldest pitcher to ever throw a no-hitter
pic.twitter.com/XvMI94ZQSG

May 1, 1988: Chicago Bulls SG Michael Jordan became the 1st player to record consecutive 50-PT games (50 in Game 1, 55 in Game 2) in NBA Playoff history during a defeat of the Cleveland Cavaliers; MJ also tied the NBA postseason record with 24 FGM
pic.twitter.com/Ir40lYQgPr

Most SV’s with 1 franchise OTD

May 1, 2002: San Diego Padres RP Trevor Hoffman became MLB’s all-time leader in SV for a single franchise with his 321st as a Padre
pic.twitter.com/2t8JK3oxSY

It’s #NFLDraft Day, so you know we had to post about Prime Time. In his return to baseball in ‘01, he had an electric day at the plate. pic.twitter.com/KquGG5lXer

2002: San Diego Padres RP Trevor Hoffman became MLB’s all-time leader in saves for a single franchise with his 321st as a Padre

1975: Milwaukee Brewers OF Hank Aaron passed Babe Ruth as the all-time career RBI leader with his 2,210th; baseball-reference credits Ruth with 2,214 career RBI’s but the MLB Commissioner’s office accepted it at 2,209

1920: SP/OF Babe Ruth hit his 1st HR as a member of the Yankees (50th of his career) as New York defeated his former club, the Boston Red Sox, 6-0 at the Polo Grounds